Having radical fringe groups tearing at the seams of America is not a new phenomenon. Less than a 100 years ago, the Nazis were gathering for big rallies on U.S. soil, running youth camps, their numbers growing by tens of thousands.

In the America of the 1930s, pro-Hitler groups like The Friends of New Germany carried out propaganda and intimidation campaigns to disseminate the National Socialist agenda. Their members wore uniforms, consisting of a white shirt and black trousers for men, topped by a black hat with a red symbol. Female attire included a white blouse and a black skirt.

In 1936, the Amerikadeutscher Volksbund, or German American Bund, was created as “an organization of patriotic Americans of German stock.” They ran around 20 camps for youth and training, eventually establishing 70 regional divisions around the nation.

The ostensible goal of the German American Bund was to represent Americans of German descent but its true objective was to promote the views of Nazi Germany. The Bund played into the growing “America First” stance that sought to keep the U.S. out of World War 2, while amplifying its racist messages. 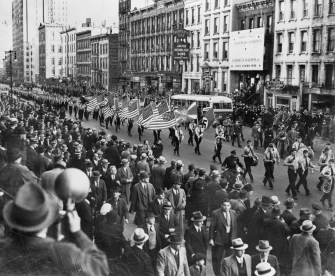 One of the most astonishing events held by the Bund was the “Americanization” rally it held at Madison Square Garden in New York on February 20th, 1939. The event, attended by 20,000 people, consisted of railing against Jewish conspiracies, President Roosevelt and similar sentiment. While speaking, the leader (Bundesführer) of the organization, Fritz Julius Kuhn (a chemical engineer by trade), spewed anti-Semitism, calling the President “Frank D. Rosenfield” while describing his New Deal as a “Jew Deal”. He referred to the U.S government as a whole as “Bolshevik-Jewish” and kept attacking the press and American culture as being run by the Jews.

The rally featured a giant banner of George Washington, as the speakers tried to link the event to his birthday and supposed non-interventionist positions.

Huge crowds of up to 100,000 people comprising of anti-Nazi protestors also came to make their voices heard at this event, but were held back by 1,700 New York police officers.

For chilling footage and more on the Manhattan rally, check out the Academy Award-nominated short documentary film A Night at the Garden:

Besides the rallies—there were many held throughout the ’30s—one of the main efforts to inculcate Nazi ideology in America took place in summer camps.

Audrey Amidon from the National Archives shared the significance of the camps in her interview with Gizmodo:

“The summer camps, complete with the official uniforms and banners of the Hitler Youth, might be the most visual and chilling example of the [Bund’s] attempts to instill Nazi sympathies in German-American children,” said Amidon.

The camps had boys and girls from 8 to 18, most often the children or grandchildren of German immigrants. Nearly a quarter of all U.S. citizens was of German descent in the 1930s, but the vast majority of them did not support Nazi ideology.

Along with usual activities you might find at a summer camp, the kids who attended were taught about Hitler’s racial ideas, dressed in Nazi-esque uniforms, practiced drills and addressed higher-ups with Hitler salutes.

One prominent such camp was Camp Siegfried, in the Yaphank hamlet on Long Island. The town regularly held Nazi parades, while its streets were named after Hitler and his top brass like Goebbels. 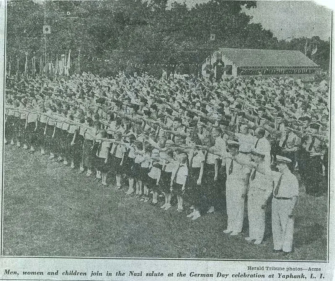 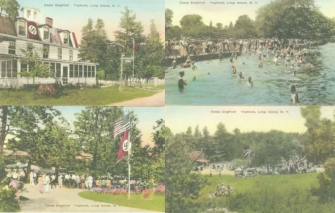 The Bund’s activities obviously wound down as the U.S. entered World War 2, with many of their leaders eventually arrested as enemy agents. For more striking fascist Bund camp footage, check out this home movie:

Partisanship can now be seen in brain scans.