Student loan debt is exploding in the U.S. That’s at least how New York Governor Andrew Cuomo characterized it while recently unveiling a set of measures to alleviate the burdens of debt for New Yorkers. Other states – Washington, California, Connecticut, Maine – have recently attempted or adopted similar legislation. And overall, the nationwide data suggest Cuomo’s description might not be hyperbolic.

How can data help us better understand student indebtedness, and the kinds of students most likely to default? 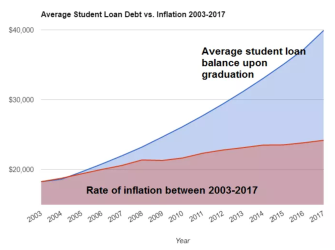 The New York Fed’s Liberty Street Economics blog recently published an extensive analysis that outlines some of the determining factors behind student loan default. Using a data set that matched New York Fed Consumer Credit Panel (CCP), based on Equifax data, to National Student Clearinghouse (NSC) education data, researchers Wilbert van der Klaauw, Michelle Jiang, Nicole Gorton, and Rajashri Chakrabarti formed a representative sample of young Amercian adults that they used to track default rates and education attainment over time. Their sample is limited to students born between 1980 and 1986, and who took out loans to finance their education.

Some of their findings weren’t exactly surprising, such as that students were more likely than their peers to default if they:

Still, the exhaustive analysis provides an insight into subtler factors that contribute to student defaults. 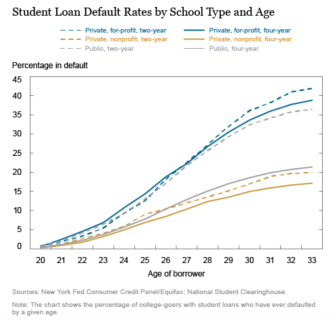 The analysis also showed that students who graduated with a bachelor’s degree had the lowest default rate. 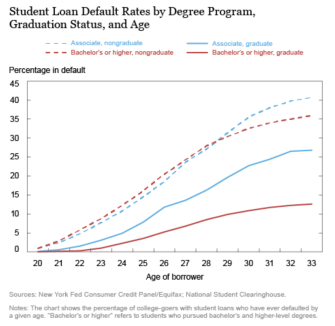 For another analysis, the researchers separated the students in their sample by major into four broad groups: Arts/Humanities, Business, STEM, and Vocational, which included majors like aviation, cosmetology, and welding.

Students who majored in the arts showed significantly higher default rates, but researchers noted that: 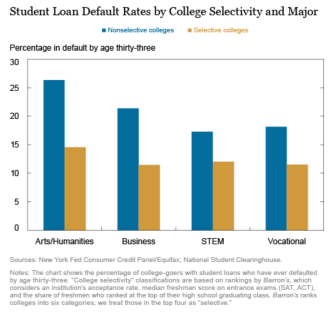 Finally, the researchers divided their sample into two groups based on the average income of the household in which they grew up, as determined by zip code. They found that students from less advantaged backgrounds showed higher default rates. 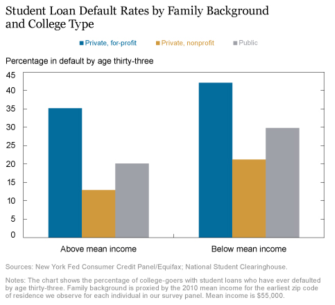 Ultimately, attending a four-year, for-profit college correlated most strongly with default, followed by dropping out of college. Summing up their analysis, the researchers wrote:

“This represents preliminary evidence that later life outcomes—for example, the ability to buy a home and maintain a strong credit score—may vary widely among student loan holders based on their educational choices and backgrounds.”

Is paying for a college degree still worth it? It of course depends on whichop-ed you want to read. But most of the data suggest that Americans with bachelor’s degrees get hired more often than their peers. 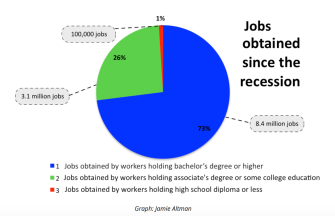 Experts say we should only be working 15 hours per week, so why are some working 80?
▸
6 min
—
with
James Suzman
The Big Think Interview

How to live an intellectual life

Being an intellectual is not really how it is depicted in popular culture.
▸
5 min
—
with
Zena Hitz
Strange Maps

Without the now-obscure land investment affair, Georgia might have been a “super state.”
Neuropsych

A study of 1.6 million people ties high incomes with more positive emotions and fewer negative ones, but only towards the self.
The Present

Learn a foreign language with over 40% off Rosetta Stone

This discovery brings into question how much free will there is in deciding to break the law.