The rate of inflation has a big impact on your financial situation, affecting mortgage payments, savings and the cost of your weekly shopping.

How the price of goods and services we regularly spend money on changes over time is used by governments and businesses to take the temperature of a nation’s economy. It’s generally accepted that low, predictable growth is best for everyone. The global inflation rate is currently around 3.6%, according to the International Monetary Fund.

But if inflation is too high or if it moves around a lot, it’s difficult for businesses to set the right prices and for consumers to plan their spending, says the Bank of England. If prices go up drastically in a short time you can’t buy as much with the same amount and it can be hard to work out how much your money is worth.

And some countries that are hobbled by political and economic instability – Venezuela, Zimbabwe and South Sudan chief among them – are facing cripplingly high inflation rates, according to data compiled from Trading Economics. 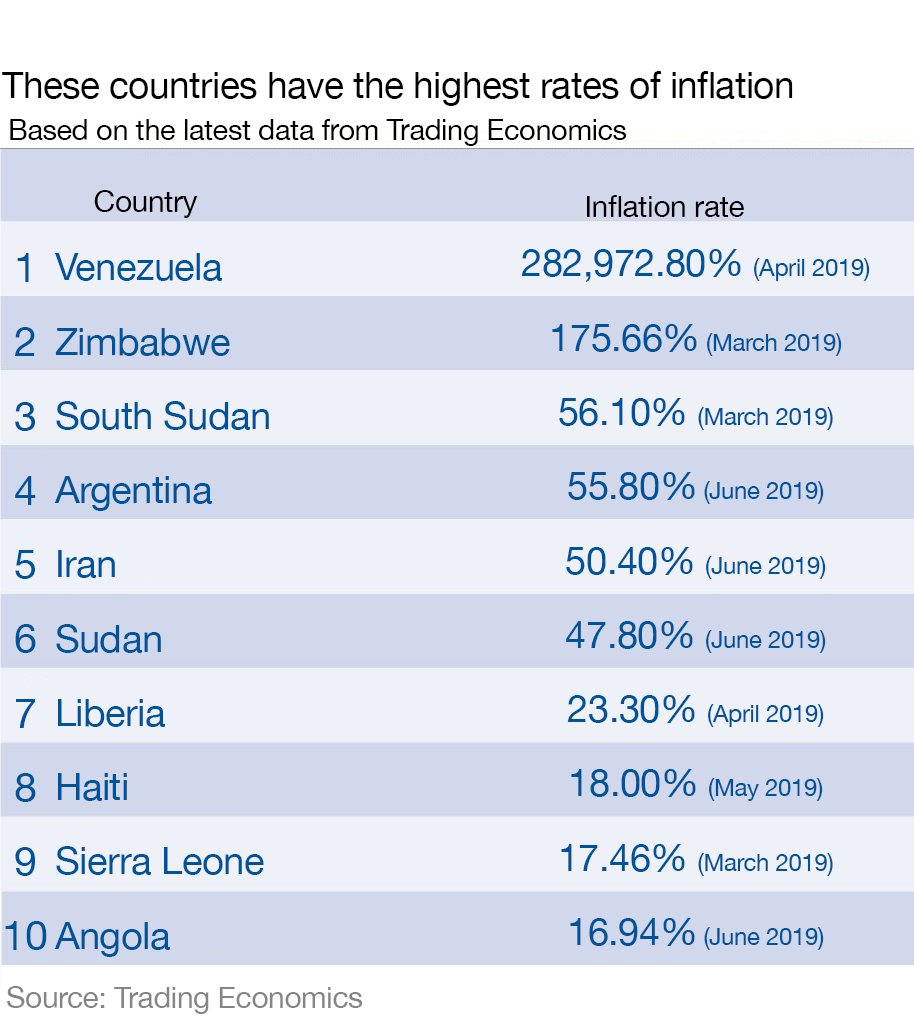 Crisis-hit Venezuela tops a list of countries with the highest levels of inflation, with a rate estimated at almost 300,000% in April. With the nation’s political and economic turmoil showing no signs of abating, the IMF predicts the rate will soar to 10 million percent by the end of the year.

Around 4 million people have fled Venezuela amid political and economic uncertainty, according to the UN Refugee Agency. The economy is less than half the size it was in 2013, as plummeting oil production, hyperinflation and political uncertainty combined to create a vicious cycle that’s proving hard to break.

Second on the list, Zimbabwe currently has an inflation rate just under 176%, stoking concern that the nation is returning to the hyperinflation it suffered a decade ago.

Prices are increasing amid a scarcity of essentials, including bread, fuel and medicine. Zimbabwean President Emmerson Mnangagwa promised stability after he took over from Robert Mugabe in 2017, but it seems an economic revival is yet to materialize.

Tags
capitalismeconomicsglobal developmentInequalitymarketsmoney
In this article
capitalismeconomicsglobal developmentInequalitymarketsmoney
Related
The Past
How people crossed the Atlantic Ocean before commercial aviation
For centuries, the only way to travel between the Old and New World was through ships like the RMS Lusitania. Experiences varied wildly depending on your income.
The Past
How the crusades spawned the world’s first financial services company
The Knights Templar were not only skilled fighters, but also clever bankers who played a crucial role in the development of Europe’s financial systems.
The Present
To the moon? Five microeconomic lessons from Bitcoin
Bitcoin is often derided as volatile, but a new report suggests there is a method to the madness.
Health
Want to live longer? You may need to move
Longevity gets a new motto: location, location, location.
The Present
3 brain hacks to control your Amazon addiction (from a neuroscientist)
Your emotional brain is being manipulated to shop more, but there are ways to resist.
▸
6 min
—
with
Big Think
Up Next
Health
McDonald’s rolls out Beyond Meat burger, the ‘P.L.T.’
It will be available in select Canadian locations starting Sept. 30.