Rob Bell is a New York Times bestselling author, speaker, and spiritual teacher. His books include Love Wins, How to Be Here, What We Talk About When We Talk About[…]
Go to Profile
Videos

Does Technological Change Unify the World, or Pit Us Against Each Other?

This is a new age of industrial revolution. New inventions have come out that are straight from the imaginations of science fiction writers. Phones that are small computers, computers that are flat and thin as a pancake. Television shows are stored on our phones too, and new vaccines come out for each type of flu strain that evolves. It’s a fantastic era of innovation, with new ways to communicate over vast lanes of social media. As Mark Fischbach aka YouTube personality Markiplier has stated, “The global, shining goal of the internet is to combine everybody, and let everyone talk with everyone, and unite and make cool stuff together.”

That may be true. Many of the most popular internet sites have the main goal of socialization. People from opposite hemispheres can Skype or FaceTime, leading to immediate real-time responses, infinitely faster than the way pen pals used to work. But according to Rob Bell, we have the same issues as we’ve always had. Even though we can be closer than ever before with people from across the country, we still want separation.

Perhaps it’s because many people are fighting this new technology, and that’s pretty easy to see. Almost everyone has heard someone complain about Facebook and Twitter, saying but it’s not real communication. You’re not talking to real people. Even though that is what it is. People are still learning about new cultures and new places from Twitter and Snapchat, and citizen journalism has taken off with live-tweeting of major events.

Rob Bell’s newest book is How to Be Here: A Guide to Creating a Life Worth Living. 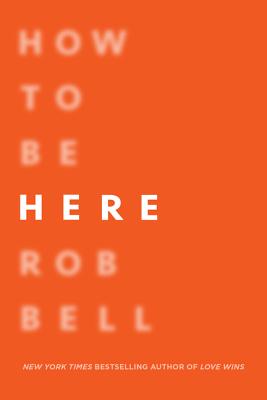 Many people dig their heels in against this new technology, resisting what it brings to the world. When it brings two places closer together, their first reaction, according to Bell, is to resist even harder. They want bigger walls to keep ‘strangers’ out. And people can see this mentality in action with the presidential candidates debating this very thing. According to Bell, people in America either see the rising birthrate of non-white babies one of two ways: as a threat or as an invitation to new possibilities. Some people want to build a wall to protect the country, and others, who are more open, want to tear it down. Make no mistake, tribalism is a powerful and valuable thing, but hopefully the sole reason for its existence isn’t just out of a base fear for ‘the other’. People are smarter than that – right?

Rob Bell: We have better technology than ever, we’re more enlightened than ever, why do we see these upsurges or explosions of very primal, tribal conflict? "Let’s build a wall. Let’s keep them out. Let’s have these people separate from these people. Let’s make sure that those people never..." There’s a French paleontologist named Pierre Chardin who wrote about 100 years ago and he said that everything that rises must converge. And he essentially laid out an arc of the history of the world and the evolution of the universe and that there are moments of great conflict on the way to unity, depth and complexity. So there’s actually a whole body of thought that if everybody’s in separate tribes but the whole thing is moving us towards a global tribe, a connection - everybody’s my brother and sister. The only way for this tribe to become close connected brother and sister with that tribe is they’re going to have to interact. And when they interact those first interactions may be a little dodgy, as the Brits would say. There may be some conflict.

I also think if you go beyond simply larger large-scale movement towards complexity and unity whenever you encounter the unknown, whenever you encounter pain, loss, suffering or something different it will either break you open and you will be broken open in the best kind of ways so that you become more expansive. South American Indians have this phrase. They talk about making room within yourself for the immensities of the universe. So you were always taught that these people are like this but then one of those people moves in next door and you find out they’re actually fantastic. They’re actually wonderful. Like, the best neighbor you’ve ever had. Then whatever you were previously taught, whatever bias, racism, bigotry, you now have to redo all your labels and categories because they don’t work because this flesh and blood person has smashed them to pieces. So this disruption, it will either break you open and you will become more expansive, more inclusive, more of an embrace for the other. Or the pain of that disruption, you will dig your heels and you will regress. You will build a bigger wall between the two of you.

And I would argue that what’s happening right now is the world is shifting really, really, really fast. If you go back 500 years and let’s say the year 1543. If I were to say to you 15 years after the invention of the printing press. What, 1443 or whatever that is. If I were to say to you, hey this books thing. I think this books thing could really catch on. We all laugh now because we’re like yeah, that books thing did kind of catch on, and it upended government, authority, education, religion, science. We’re essentially 15 years into the Internet. We’re only 15 years into what could - probably is the greatest sort of technological invention or revolution in at least 500 years, maybe ever. So we’re in this time of massive transition. If you would have said to Jeb Bush at the beginning of the republican primaries, who had more money stockpiled than any candidate ever with more name recognition than any candidate, 'Oh by the way, you’re going to get destroyed by a guy on Twitter.' We would all have said no way. That is the weirdest idea. . Oh yeah, a candidate’s going to come along who’s not going to spend any money. He’s going to have no structure. He’s going to have no field operatives. He’s going to Tweet. We would all be like no. Like, there’s a way it’s done.

And yet that’s what happened. So you can already see 15 years in entire things changing. I mean you have the printing press. Not long after the printing press you have people saying things like: 'Hey by the way. I don’t think the earth is the center of the solar system.' Which was how human beings had seen things for thousands of years. So I think we’re in one of those periods. And whenever you have a disruption all new technology will bring some form of disruption. Some people will be like look at this new world. Look at the possibilities. Let’s figure this out. And other people will dig their heels in. They will fight it. They will white knuckle all the more. And the reason why we know this is true at a macro level is think about friends of yours who have been through great suffering. Think about friends of yours who lost a child or went through a horrible divorce. Generally people either become bitter or they become better. They generally close down. Their heart becomes harder or all of that pain somehow softens and breaks them open and they become more open, more expansive. They often respond either by becoming a victim. Look what happened to me. Look at all the reasons I have to not step into the fullness of life.

Or they go out into the world carrying around this wound. And others who have been through what they have been through they look them in the eyes and say me too. And they become this extraordinary voice for healing. And the exact place of their wound is the place where all sorts of grace and help flows through them to others. So I think that’s what you’re seeing right now is the world is different. In 2008, 48 per cent, I believe it is, of births in America were to non-whites. And at the time a number of people said this statistic is important because this will shape the political future of our country. Are you okay with that? Are you okay with all this difference and diversity? Do you see it as a threat? Are you saying 'What happened to my country?' or are you saying 'Look what’s happening to my country!'. It is a threat or it is an invitation to new possibilities? And what we’re seeing right now is two very distinct answers to that question which have always been the two responses.

The Science of Creativity: How Imagination and Intelligence Work Together in the Brain