Today’s words of wisdom come from Rod Serling (1924-1975), American screenwriter, producer, and creator of The Twilight Zone. Serling was active in politics, both on and off the screen, and helped form television industry standards. He was also known for clashing with television executives and sponsors over a wide range of issues including censorship, racism, and war. Like Star Trek’s Gene Roddenberry, Serling incorporated his own progressive views on racial relations into his science fiction. Today he is best known for his appearances on the classic TV program as its mysterious, cigarette-smoking narrator.

Below, Serling points to prejudice as a running motif in his writing. Science fiction offered him a form several abstractions away from reality in which Serling could explore issues of social justice and hate while being protected by a cushion of the fantastical. But don’t let the mise-en-scène distract from the meat of Serling’s rhetoric: We will forever be destined to social misery if we fail to overcome our need to dislike each other. 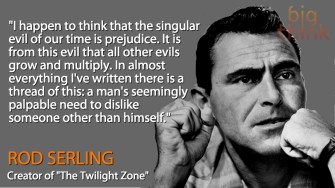 “I happen to think that the singular evil of our time is prejudice. It is from this evil that all other evils grow and multiply. In almost everything I’ve written there is a thread of this: a man’s seemingly palpable need to dislike someone other than himself.”

Hillary Clinton continually tweaks her public image, but there is a greater cost to not knowing who you are: We don’t know, either.