For those with an extreme allergy, anaphylaxis is an ever-present concern. Such a reaction can occur within minutes and cause serious, even life-threatening symptoms such as rapid heart rate, a drop in blood pressure, and a swelling of the nose and throat that can severely hamper, even cut off, breathing. This generally occurs in response to certain foods like nuts or eggs, or an insect sting. In these cases, an injection of epinephrine (adrenaline) is required to stop the reaction and bring the person back to normal.

Most often, we consider an EpiPen the solution. But this is in fact a brand name for an adrenaline auto-injector. Inside of a decade, the device’s manufacturer, Mylan NV, has raised the price dramatically, causing complaints among families and institutions that serve children. Schools, summer camps, and other locations often carry them. The epinephrine it contains has a shelf-life of just one year. So parents and others must purchase a new one annually, even if they’ve never used the old one.

Such a dramatic rise also hurts the elderly who are often on a fixed budget and taxpayers via Medicare and Medicaid. So how much did Mylan raise the price? It went from $100 per two-pack in 2007, to $600 per two-pack in August 2016. Meanwhile, Public Citizen—a consumer watchdog group, found that the same, name-brand two-pack was cheaper in many other countries, including in the UK where it sells for a mere $69.

The rise was so egregious that Mylan CEO Heather Bresch was dragged before a House oversight committee. During a tense hearing, legislators from both parties questioned the move, which some called “sickening,” “disgusting,” and a “blatant disrespect” of vulnerable families. Reining in out of control drug prices is one of the few issues that has bipartisan support. There has been much debate surrounding it, but there isn’t currently a solution that is politically viable.

One of the most egregious things to come out of that hearing is that Bresch’s own salary rose dramatically, from $2.5 million to over $18 million, in line with the increase in price for the EpiPen. Due to public outrage and under pressure from Congress, Mylan has released a generic version costing $300. It also expanded its financial aid program, to allow schools and other institutions easier access to the auto-injectors. 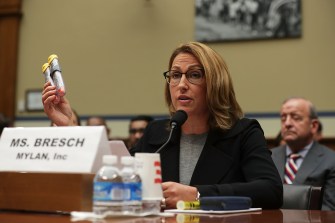 Bresch isn’t the only big pharma CEO to be forced to appear before Congress. Drug prices in the US have forced many across the nation to go without prescription medication. President-elect Donald Trump lambasted drug makers at his press conference on Wednesday for raising prices so rapidly. “They’re getting away with murder,” he said. The stock prices of Big Pharma companies plunged afterwards. Trump said he wants to change the bidding process that determines drug prices, in order to get a better handle on them.

Now CVS Health Corp. has stepped into the fray. The nation’s largest pharmacy retailer is offering its own version of the EpiPen, at a considerably lower price – about one-sixth of Mylan’s name-brand product, and a third of its generic version. The CVS two-pack, generic version of the auto-injector, called Adrenaclick, retails for $109.99. The product was approved by the FDA in 2003. It holds the same hormone but delivers it slightly differently. Though easy to assemble, it does need to be put together by hand.

The announcement comes just months after Mylan’s CEO was grilled by Congress. CVS president Helen Foulkes said the retailer responded after receiving a petition with 150,000 signatures, and millions of social media messages, asking for the chain to offer an affordable alternative. As a result, Foulkes said, it has made them available in all of its retail locations, around 9,600 locations nationwide. The price will be the same, whether a person is insured or not, and they will be offered over the counter. Savvy shoppers note: Adrenaclick’s manufacturer, Impax Laboratories, offers an additional $100-off coupon for patients who qualify, lowering the price further to just $9.99.

Mylan has blamed middle-men and specifically retailers such as CVS for dramatic price hikes. Financial records also indicate that the pharmacy chain is under pressure from mail-order pharmacies, Walgreens, and other competitors. In this move, CVS may be winning over public opinion, separating themselves from the issue, and pushing back on competitors in one fell swoop.

To learn more about the EpiPen and the controversy surrounding it, click here:

Antidepressants: Why the ‘Overmedicated America’ Narrative Is Harmful

Elements of life discovered everywhere in the Milky Way

But not every location was created equal.“Far out in the uncharted backwaters of the unfashionable end of the western spiral arm of the Galaxy lies a small unregarded yellow sun. Orbiting […]