Reddit is likely the last place you would (or should) look for dating advice. There might be subreddits dedicated to this topic, but in general, you’re more likely to find reasons why people are single than credible tactics for romance. Menelaos Apostolou, an assistant professor at the School of Humanities, Social Sciences, and Law at the University of Nicosia in Cyprus, realized this.

For his latest study, Why Men Stay Single? Evidence From Reddit, which is published in the journal Evolutionary Psychological Science, Apostolou analyzed 6,794 responses (from over 13,000 comments) on a thread about why men are single, classifying them into 43 categories. He writes:

Many men are currently in a self-inflicted prison. In recent years, the white man has labeled himself an endangered species. The popularity of Jordan Peterson and rise in overt white nationalism both hint at the many fractured egos trying to regain a “manhood” that is as historically evasive as the myth of the “Great America” of, I don’t know, the 1950s? The 1850s? Sometime before now must have been better, so the thinking goes—you know, when “men were men.” 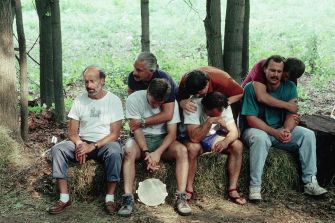 The Wildman Gatherings are modeled to some extent on the rural gatherings of men that Robert Bly has been conducting since 1981, and the ‘wild man’ is the archetypal title character in Iron John. The men’s movement has come to public attention thanks to poet Robert Bly and his best selling book. (Photo by Mark Peterson/Corbis via Getty Images)

Not that men’s movements haven’t existed before. Robert Bly and Michael Meade are modern leaders exploring the connection between mythology, psychology, and manhood. Yet more recently that movement has given way to testosterone-fueled works by the likes of David Deida. Whereas the former thinkers focused their energy on men talking to men about what men need, more recently we’ve seen men speaking to men about what women want, which leads to all sorts of problems. Instead of asking women directly, the cult of the “strong man” is a dangerous echo chamber.

Thus, you have statistics like these, which Apostolou cites in his paper:

In 2015 in the UK, 34.5% of the adult population identified as single and has never cohabited or married. In the USA, a Gallup survey found that 64% of adults in the age group 18–29 identified as single and had never married … Eurostat estimated that in 2013, single-person households accounted for 31.7% of the private households in the EU-28. A 2016 census in Canada indicated that one-person households accounted for 28.2% of all households surpassing all other types of living situations.

Though the myth of the necessity of a nuclear family should be dismantled, there is a difference between choosing to live as a single man, which is a perfectly acceptable (and probably best) choice for some men, and becoming depressed or bitter about your relationship status. Social media provides a treasure trove of information regarding the latter. I’m constantly amazed at how many personal details people reveal regarding their love life online. Instead of just staring, mouth agape, Apostolou decided to put these data to use.

By frequency, poor looks takes the cake as the most cited reason men think they are single. While this has never been an easy circumstance to grapple with, social media isn’t helpful. Beauty standards are always fluid dependent upon time and culture; the trend of putting only your best face forward—”influencers” spend an hour or more doctoring one photo out of a hundred before letting it be published—is certainly not helping those trying to just be themselves. Living in such a looks-driven culture dominates a conversation that could include arguably more important qualities, like honesty, trustworthiness, humor, and fidelity.

Which is probably why the second most popular reason is low self-esteem/confidence, closely followed by low effort. The feedback loop is clear: I’m not attractive, so I don’t have the confidence to date, which makes me try less. Habitual patterns of thinking create habitual patterns of behavior. When you’re stuck in such a loop, you can easily spend a lifetime alone.

In fourth place is not interested in relationships, which, as mentioned, is a perfectly acceptable reason—if it’s really the reason. I’ve known a few men who claim the above while secretly desiring a relationship. The question then is whether you’re willing to sacrifice your schedule, home life, sex, and more with one person, or if you really enjoy having the bed to yourself.

Poor flirting skills and introverted are in fifth and sixth place, again making for an understandable grouping. Introversion is not a quality that lends itself to flirting well. In both regards, practice might not make perfect but it does give you a chance. It just depends on how much you’re willing to let go of your ego. Plenty of women (and men, but this study was focused on heterosexuals) love men that are “just themselves.” The stress of thinking you have to flirt well or not be introverted reinforces reclusive tendencies.

Seven and eight are also related: recently broke up and bad experiences from previous relationships. While the first is overcome with time, recent breakups can influence the loop of the second. Many men and women think that they “keep dating the same person.” I used to think this myself. Then I realized it was because I was actively seeking out certain patterns of behavior, and, what’s worse, my attitude helped created the conditions that made me obsess over them. In truth, you never date the same person twice. But if you focus on certain qualities, or identify them even if they don’t actually exist, you’ll certainly feel like it’s the same person. The actual problem is that you’re applying the same mindset to different women.

In ninth place comes no available women. This is usually claimed by men in specific industries that do not allow them access to a variety of potential partners. Of course, in a bigger-picture view, there are plenty of available women. Finding them is a different story. While it’s an understandable response, given how large the number of couples that have married thanks to online dating, it’s one that sounds like an excuse.

Finally, in tenth place, we return to number one: overweight. A century ago we’d be in a society that loved a little extra, as it signified high social status. But that’s not the culture we inhabit. The easy response would be to change your diet and exercise more, but it’s not always that simple. Many of the above—confidence, introversion, flirtation, self-esteem—can be attributed to weight. Our obsession with looks clouds us from noticing more important qualities. This is not to write off looks completely; physical attraction is a potent component in a relationship. But if it’s the leading reason you don’t try, you’ll never make any headway.

There are no easy answers when it comes to relationships. They will always be challenging and good ones are rarely easy to find. Mindset matters. The difference might just be in whether or not you’re willing to put in the effort to confront your excuses.

Buy more books than you ever read? The Japanese have a word for that.

Sometimes lacking proper language is just a failure of imagination.