A new study shows that altering two cellular pathways in a species of roundworm can extend lifespan by a staggering 500 percent. The discovery could help scientists develop anti-aging therapies for humans, considering that humans have the same cellular pathways featured in the research.

Scientists have spent decades trying to solve the mysteries of aging by experimenting on a tiny nematode species called C. elegans. These microscopic roundworms are ideal for aging research because they live for only two to three weeks, meaning researchers are quickly able to distinguish which alterations or mutations are related to lifespan. In 1993, a famous paper revealed that C. elegans with a specific single-gene mutation lived twice as long as roundworms without it. This discovery helped to spawn a new era of research on aging.

“The synergistic extension is really wild,” Jarod A. Rollins, Ph.D., who is the lead author with Jianfeng Lan, Ph.D., of Nanjing University, told Phys.org. “The effect isn’t one plus one equals two, it’s one plus one equals five. Our findings demonstrate that nothing in nature exists in a vacuum; in order to develop the most effective anti-aging treatments we have to look at longevity networks rather than individual pathways.”

The findings suggest that future anti-aging therapies might involve a combination of treatments, similar to how combination treatments are sometimes used for cancer and HIV. 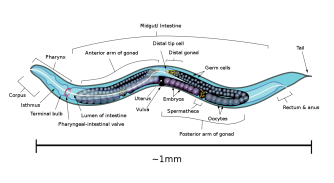 Scientists have so far failed to pinpoint a specific gene that explains why some humans live mostly disease-free into old age. Why? In addition to environmental factors that affect aging and health, the answer might be that aging is primarily regulated not by single genes, but by a so-called “longevity network,” comprised of seemingly unrelated systems in the body. For years, scientists have been trying to demystify the aging process by mapping out possible connections within the longevity network. The new study suggests that scientists are beginning to understand a bit of how this complex network operates.

Specifically, the new study focuses on the role that mitochondria, which are organelles that generate chemical energy in cells, might play in the longevity network. Recent research suggests that mitochondria may play a key role in the aging process, as described in a 2017 overview published in the journal Genes:

“Among diverse factors that contribute to human aging, the mitochondrial dysfunction has emerged as one of the key hallmarks of aging process and is linked to the development of numerous age-related pathologies including metabolic syndrome, neurodegenerative disorders, cardiovascular diseases and cancer.”

It’s unclear what effect manipulating the ISS and TOR pathways might have for humans. But a growing body of research suggests that promoting mitochondrial health could be a reliable way for us to increase lifespan. Interestingly, another recent aging study found that putting C. elegans on an intermittent-fasting diet helped to keep the roundworms’ mitochondria in a “youthful” state, which seemed to extend lifespan.

“Low-energy conditions such as dietary restriction and intermittent fasting have previously been shown to promote healthy aging. Understanding why this is the case is a crucial step towards being able to harness the benefits therapeutically,” Heather Weir, lead author of the study, told Harvard News. “Our findings open up new avenues in the search for therapeutic strategies that will reduce our likelihood of developing age-related diseases as we get older.”

Elephants mourn the dead, dolphins give names to each other, and insects can recognize faces. The animal world is much smarter than we think.
Hard Science

David Julius and Ardem Patapoutian were awarded the highest honor in medicine for their research into how human bodies make sense of and respond to the outside world.
Surprising Science

A new study looks at what happens when you get infected with two viruses at the same time.
Up Next
The Present

What do people around the world think about climate change?

Global warming appears to be front of mind for people worldwide.