We are, according to research, on the brink of a mass human (dis)connection crisis United States.

A new study by Cigna found that nearly half of Americans lack daily meaningful interpersonal interactions with a friend or family member, while 43 percent say they have weak relationships and experience feelings of isolation, and a devastating 18 percent claim that they feel there is no one that they can talk to. Alongside this loneliness epidemic is a touch, or lack-of-touch, crisis.

As technology rapidly begins to take over various aspects of our lives from food delivery to gene editing, could machines possibly replace human touch? One artist thinks it might be the future. 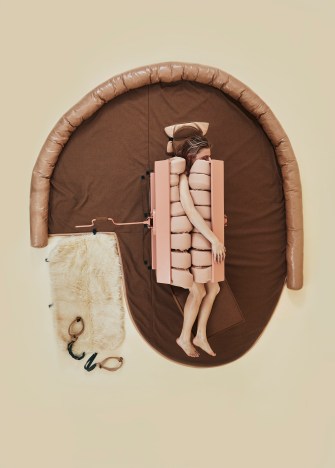 The Compression Carpet is a machine created by Los Angeles-based artist Lucy McRae that simulates a hug to a person craving intimacy.

It works like this: A person is sandwiched horizontally between a pair of cushions which offer a full-body embrace. The cushions are colored peach and brown, providing the aesthetic of warm skin tones in order to enhance the illusion of being cradled by human flesh. To use the machine you would lie down inside the cushions while another person cranks the handle to squeeze the machine around you. He or she determines the firmness of the machine’s hug.

The machine was unveiled at the San Francisco exhibition Festival of the Impossible, which explored the future intimacy between humans and machines. Participants were able to try out the Compression Carpet, with many leaving with “a glazed look in their eyes” after being squeezed McRae told Dezeen.

McRae, a science fiction artist and body architect, uses her art to examine a statement she makes on her website claiming, “We are going to have a revolution of what it means to be human.”

As we move toward a touch crisis in which we’re inundated with technology to the detriment of our mental well-being, McRae says that the Compression Carpet and its sister creation, the Compression Cradle, question whether technology will vie for our affection because of our obsession with the digital.

Researchers have developed a skin prototype called Skin-On Interfaces, sensitive skin-like cases that can be put over mobile phones, watches, or laptop touchpads to simulate skin-on-skin touch. The fake flesh intelligently registers nuances of touch and associates them with various human emotions. For example, anger is associated with hard pressure, while stroking is understood as comfort. The next step is adding anthropomorphic bells and whistles to make the smartskin more realistic, such as temperature features and, uh, embedded hair.

Because skin is what we use as an interface when interacting with other humans, the idea behind Skin-On was to add this human-like interface to our communicative mediation devices., explained Marc Teyssier, a developer of the synthetic sleeve, to Hypebeast.

Our Need for Connection

The irony of our modern predicament has been pondered many times over: Today we are perpetually connected via smartphones and various social media platforms, and yet studies are showing that we’re more isolated than ever before. It fact, those who never used social media scored lower on the UCLA loneliness scale than heavy users. And according to Cigna’s study, it was Generation Z, once dubbed the iGeneration, who were the loneliest.

This connection deficit isn’t just heartbreaking, it is toxic. We are hardwired to connect, our well-being depends on it. Multiple studies have shown that the lack of human connection has alarming impacts on physical and mental health such as increasing blood pressure, higher cortisol levels, and an increased risk of substance abuse and addiction. The New York Times reported that growing, substantial evidence is linking loneliness to physical illness along with functional and cognitive decline. It even predicts premature death better than obesity.

What Cigna found after analyzing its loneliness study results was that it is rooted in a disconnect between the mind and the body.

“We must change this trend by reframing the conversation to be about ‘mental wellness’ and ‘vitality’ to speak to our mental-physical connection,” said David M. Cordani, president and chief executive officer of Cigna, in the report. “When the mind and body are treated as one, we see powerful results.”

It might be that we underestimate the need for a connection that goes beyond the cognitively processed interactions we receive through smartphones. Could we need somatic feel of another human in order to reconnect?

Plenty of research indicates how important human touch is. For instance, famous studies demonstrating the vital importance of affective touch on children’s cognitive and social development. According to Francis McGlone, a professor in neuroscience Liverpool John Moores University, millions of years of human evolution has inscribed the need for affectionate forms of touch into our genomes.

“We are destined to cuddle and stroke each other at predetermined velocities,” McGlone told The Guardian in 2018.

What McRae’s art suggests is that it is this specific kind of touch, touch that conveys compassion, that we are deprived of in our increasingly touch-phobic society. It’s something that no text, GIF, reaction, or emoji can replace. But perhaps new sensory technology will.

Maybe society will come to believe that it isn’t just the pressure squeeze of affectionate embrace or the sensory feel of soft, squishy skin that is amiss, but a beating human heart behind that touch that we seek to reconnect with. After all, there must be some significance in the fact that hearts of those emotionally and socially close to one another beat in sync.

Or maybe we’re all inevitably headed for a brave new world where machines hug us ’till they drug us. Who needs physical human companionship when smartphones are sheathed in faux flesh?

The artifacts were often made from found objects – an Ivory dish-soap bottle transformed into an earthenware figure.
Health

The new agency wants to push the boundaries of science and technology.
High Culture

Top 6 ways to suck greenhouse gases out of the atmosphere

Researchers evaluated the best and worst ways to remove greenhouse gases from the atmosphere in a recent report.