A few weeks ago, I published the first part of an interview with Dr. John Ratey, author of Spark and Go Wild. I chatted with the Harvard Medical School professor about the role of exercise on our bodies and brains, his area of expertise. In Part Two, we discuss diet’s influence on gut and mental health, processed foods, and addiction recovery.

Derek: In Go Wild, you write that diseases of civilization are diseases of starch. Earlier in our conversation you mentioned “mismatch,” which makes me think of Daniel Lieberman’s work. Based on your research, how does sugar and starch affect us?

John: We’re all addicted to glucose. No matter how wonderful starch is, it will be broken down into glucose. Our glucose levels are too high and they’re getting higher. Inflammation is also creating a real problem with cell communication. Then we get to the point where we get insulin insensitivity, pushing us toward type 2 diabetes and metabolic syndrome, all of which leads to toxicity in our nerve cells. Eventually you begin to see erosion and miscommunication within the cell; the cells are not as effective and lead to cell death. Then you really get into the dementias and depression and all the things that happen when we’re in this sort of toxic mode.

Derek: About four years ago I went from a longtime vegetarian diet to a mostly-Paleo diet, which stopped a number of inflammatory-related problems, including, to my surprise, the cessation of panic attacks. Recently there was an article linking anxiety disorder and allergies, and I’ve also had a reduction in seasonal allergies. I don’t attribute it only to eating meat (though I do attribute it to carb reduction), but you write that eating meat is a fundamental and defining factor of the human condition at the gut level.

John: I lived Paleo for awhile. I lost weight, I got more energy, I slept better, all that. Personally I think it really does play a role. Reducing carb intake and consuming fat and protein can help give you the necessary calories that you need throughout the day. Now I’m plant-based Paleo.

A big part of our evolution was a lot of vegetables, but a lot of different ones, not just the thirty or so we have now. It was very different than getting a spinach meal.

We are meat eaters, though I do worry about the environmental impact. Is there a better way to do it? Probably. Is it Beyond Meat or Impossible Burgers? Probably not yet, but someday we’ll get there.

Content not available
Diet, Sugar and Effect on ADHD with Dr. John Ratey

Diet, Sugar and Effect on ADHD with Dr. John Ratey

Derek: If we can take animal cells and create food out of it to reduce suffering, I think that’s a wonderful way to go. But research on Beyond Meat revealed carcinogenic ingredients in their patties. There’s an ethical bonus in such a diet, but if you’re going to give yourself cancer, I don’t think that’s a valuable trade-off.

John: Right. I think that whole idea is worthy and it will get better. There’ll be less junk in Beyond Meat in the next iteration. We’ll get there because we have the science to get us there.

A big part of what we’re also talking about is the microbiome, which is what affected you and your anxiety and allergies. When you changed your diet, when you added meat and protein back and probably more fat back into your diet and reduced the carbs, your microbiome changed and your microbiome is huge. A reduction in inflammation and exercise and all these things are involved with each other and the microbiome is a massive area of interest.

In the past 15 years, this has been a growing interest and now it’s just everywhere. I’m working with a group of autistic kids in upstate New York and they discovered something about the microbiome and severely autistic kids. That’s going to be driven by more and more science. 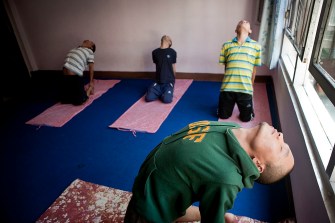 Derek: I recently covered a study about autism and processed foods that looked at a potential link between mothers eating certain forms of processed foods and autism. It was definitely one of my more controversial pieces because autism is such a controversial topic. But when you look at an ingredient list and most of it is unpronounceable chemicals, how could that not have an effect on your body?

John: Right, exactly. I’ll quickly go through this, but we’ve seen this incredible increase in numbers. One in 59 live births are going to be autistic in the United States; one in 35 and South Korea are going to be autistic. When I was in medical school it was one in 10,000. This should give us great pause. What have we done differently? In so-called “first-world countries” we’re seeing this incredible increase in autism. There’s something environmentally going on because the numbers are out of this world.

Derek: We were recently introduced from Brandon at Tree House Recovery. He initially reached out to me as you were working on addiction recovery.

John: Yes, I have a nonprofit, Sparking Life. Our recent shift in agenda is to look at exercise as part of the treatment for people in recovery. They’re not doing it in a lot of recovery centers; at most it’s optional. You go to a fancy recovery centers and they have lots of nice equipment and they recommend it, but it’s not like you have to exercise. At Tree House, fitness is very much part of their deal.

Crossfitters and Orange Theory people are using it to help people stay in recovery and find a different path throughout their life. In Spark I wrote a chapter on addiction because we know that exercise helps us deal with cravings. We really have a tool that can be very useful. Tree House emphasizes exercise and physical health as well as being connected to people. Being connected to others is not just a good idea. It’s essential for our body and our brains and our souls. We have proof that being connected makes a huge difference.

Living at a higher elevation is a double-edged sword.
Up Next
Hard Science

The first human-monkey hybrid has allegedly been created in a Chinese lab.