There are many eye-opening moments in the Netflix documentary, “American Factory.” The film details the culture clash that occurred when a Chinese billionaire opened a factory in an abandoned General Motors plant in Ohio. The workforce, consisting of Chinese and American employees, at times feels like two alien races trying to figure one another out.

To Americans, the required obedience and seven-day workweek demanded by Chinese managers (of Chinese workers) is startling. The level of enthusiasm for Fuyao at the employee party in China disturbs on an Orwellian level. But there’s an unspoken difference that proves equally shocking: the two ethnicities look like different species. Nearly every American worker is overweight.

As the NY Timesrecently reported, obesity is the leading cause of mortality in the United States. Obesity costs the nation $1.72 trillion every year. As Bill Maher pointed out last week, 53 people were killed in mass shootings in August. By comparison, in the same month 40,000 Americans died because of diseases associated with obesity, causing him to call liberals “the NRA of mayonnaise” for their unwillingness to openly discuss this mass killer.

I grew up overweight and was bullied for it (a topic I discuss in more detail in this article about male body dysmorphia.) Add to the fact that I have large ears and there’s a recipe for a lonely childhood. I spent many of my formative years being taunted as Dumbo. There’s nothing fun about it. Those experiences destroyed my confidence and created plenty of self-doubt later in life. Still, I was able to use that shaming as motivation to transform.

I would never advocate bullying as the proper course of action, yet bullying is not shaming. This is where the PC crowd gets tripped up. As Jennifer Jacquet writes in her book, Is Shame Necessary?, frivolous shaming distracts our attention from what matters, and right now healthcare in America really matters.

Jacquet writes that, according to anthropological studies, two-thirds of human conversation is gossip about other people—a stunning number, but given our fascination with selfies and social media, one easy to comprehend. We are influenced and inspired by others. We might obsess over what we don’t have too often, but when it matters, we can also change our habits. Shame is one means for accomplishing this.

This is how many documented tribal cultures work. Their justice system is a circle, the accused in the center. Shame is an evolutionary tool that helps create better behavior when performed with the intention of transformation. It can establish and enforce new norms.

Of course, we don’t live in tribal cultures befitting of Dunbar’s number. Though we mostly remain close to a limited number of people (also per Dunbar), our “tribe” is global. Circles are too wide to implement. We need better recourse for shame. For better or worse, that relies on governmental intervention (as we’ll discuss below).

There are seven habits of effective shaming according to Jacquet.

“The transgression should (1) concern the audience, (2) deviate widely from desired behavior, and (3) not be expected to be formally punished. The transgressor should (4) be part of the group doing the shaming. And the shaming should (5) come from a respected source, (6) be directed where possible benefits are highest, and (7) be implemented conscientiously.”

Obesity fits the bill of transgression. Every American is implicated in skyrocketing healthcare costs, regardless of how healthy or unhealthy; the premiums of the fit increase due to costs of avoidable treatments for obesity. Obesity deviates wildly from natural biological behavior; the photo from fifties Maher points to is evidence of how quickly Americans have grown. Of course, there should be no formal punishment, yet that doesn’t imply that we remain silent.

As for respected sources, the Times article notes that the simple act of implementing medically tailored meals for the sickest Americans could save each patient $9,000 a year. There are other actions, many of which require the government: taxing sugary beverages; subsidizing healthy food over the added income that corn, soybean, and beef manufacturers receive; lowering sugar and trans fat standards on foods; improving school meals and better educating children on nutrition; and expanding school garden programs. I would also add reducing the amount of processed foods being sold as that is the biggest source of our malnutrition. 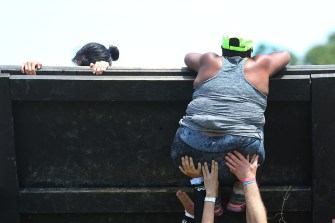 Reality is far from idealism, however. Michelle Obama was derided by conservatives for planting a garden at the White House, while one of the first actions taken by the Trump administration was destroying it. The very agricultural feat that allowed the proliferation of our species is now seen as an “agenda.” We’re killing ourselves by what goes in and what comes out of our mouths.

Americans, as the Times states, are sick; more adults are obese than not. Over 100 million American adults are pre-diabetic or diabetic, nearly half of the nation’s adult population. Add to that the 122 million people suffering from cardiovascular disease.

We’re simply unwilling to discuss this public health crisis in any serious manner. We’ll ogle at statistics yet never point to the responsibility citizens need to take in reversing those numbers. Even more tragically, we’re unlikely to hear any Democratic hopeful frame the healthcare crisis in this context even as the data stare us straight in the face.

Obesity is affecting the bodies and minds of younger generations as well. In 2016, the largest increase in any cosmetic surgery was teenage male breast reduction. I remember the stigmatization I felt at that age—it sucks. But every cosmetic surgery is a response to a neurosis we maintain about ourselves, one that is often the result of a society setting unrealistic beauty standards.

As Maher stated, though, this is not about beauty. It’s about health, and we’re failing by that measure. As mentioned, bullying is not the right response, but I did feel shame about my weight as well. That sensation led me to invest in my health. I’ve taught group fitness for 15 years and maintain an optimal weight. At 44, I’m stronger, more mobile, and more flexible than I’ve ever been. That shame was fuel for focusing on good health, energy that keeps me in the gym five to six days a week.

It must also be pointed out that not everyone is in the same position. Food deserts are real. Processed foods infiltrate neighborhoods as plentifully as opioids, yet not nearly as discussed. And some people are physically incapable of regular exercise, though at times this is due to injuries or other health problems—some caused by being overweight, pointing to the vicious circle that obesity creates.

Sometimes, though, we simply make excuses because we languish in our bad habits. We focus more on what we don’t think we can do than what we actually can accomplish. This is where shame can be utilized most powerfully as a tool for change.

Is shame necessary? Sometimes it is. The data are evident yet we seem incapable of having a mature conversation about them. Until we do, the problem is only getting to get worse, and we simply can’t afford to let that happen.

What does self-actualization mean in different cultures?

Critics complain that Maslow’s hierarchy of needs focuses too much on the West. Yet other cultures often have similar ideas about personal development.