Ever since Frankenstein, scientists have been keen to avoid the public perception that they are playing God. This is part of the reason why the scientific community reacted so strongly to the Chinese biophysicist He Jiankui’s announcement in 2018 that he had genetically edited the embryos of two girls in order to make them more resilient to HIV. As a result of his work, He was fired from his position and may face criminal charges.

Now, new research published in Nature Medicine underscores the reason for this backlash. The study examined a database of the genetic profiles of over 400,000 individuals from the UK, narrowing in on those who had the delta-32 mutation to the CCR5 gene. When an individual inherits delta-32 from both parents, they have a markedly strong resistance to HIV — this is the same mutation that He introduced into two subjects known by their pseudonyms Lulu and Nana using the gene-editing technique CRISPR.

HIV resistance is an obvious benefit of this mutation, but the trouble with gene editing is that it can be wildly unpredictable. “This is far too premature,” said Dr. Eric Topol, head of the Scripps Research Translational Institute in California. “We’re dealing with the operating instructions of a human being. It’s a big deal.” The new research showed that this tampering did have some unintended consequences: Individuals with this genetic mutation live two years less than those without it. 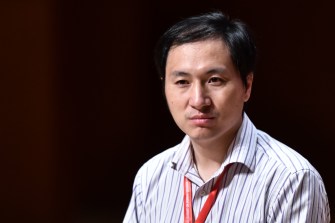 He Jiankui during a panel discussion after presenting his results at the Second International Summit on Human Genome Editing in Hong Kong.

He selected Lulu and Nana for gene editing because their father had HIV. It’s far more common for HIV to pass from the mother to the offspring, but it is possible, albeit rare, for HIV to pass from the father to the offspring. Providing Lulu and Nana each with two copies of delta-32 mutation did likely protect them against this possibility as well as from catching HIV later in life.

However, some evidence exists that individuals with two copies of delta-32 catch influenza, West Nile, and certain other diseases more easily. While HIV is a grievous disease, these far more commonly encountered diseases can often be just as deadly, especially in one’s older age. This is precisely the result that the researchers uncovered in their analysis. Individuals with two copies of delta-32 were 20% more likely to die before the age of 76, with the highest probability of death occurring at 74.

What’s more, because Lulu and Nana had their genes edited while they were embryos, this mutation will be passed down to any offspring that they have later. Given this scope, its increasingly clear why scientists reacted with such horror at He’s actions: Gene-editing an embryo could have long-lasting, unintended consequences that could seriously impair what would have been otherwise healthy individuals for generations.

Another potential unknown impact that delta-32 could have is related to the girls’ ethnicities. The mutation is far more common in individuals from northern Europe, while its very rare for individuals from Asia and Africa. Some researchers argue that the presence of delta-32 in Europeans is due to the impact of plagues from the Middle Ages, such as the Black Death. The absence of this mutation in other parts of the world is likely because it simply isn’t useful there—different environments have different diseases, against which delta-32 could be more deleterious than beneficial.

He’s actions and studies such as this one underscore the importance of a smart, evidence-based regulatory framework for gene-editing technologies. One question we need to resolve is whether germline editing, such as that performed on Lulu and Nana, should be permitted since these changes can be passed down to subsequent offspring. We also need a way to gauge the impact of editing specific genes so that we’re not surprised by unintended side effects, like the diminished lifespan caused by delta-32. All in all, this study and He’s work show us that there are simply too many moving parts to just introduce genetic mutations and see how things go. We need to be more rigorous than that.

A recent study sheds light on the evolutionary history of rhinoceroses and their remarkably low levels of genetic diversity.
Thinking

Gray zone: when is it best not to save a life?

Medical science can save lives, but should it do so at the cost of quality of life?
Life

A genetic study of British Columbia grizzly bears finds a weird link to local human languages.
Up Next
Smart Skills

How to make sure you stay on track with your goals

Setting goals might be easy, but sticking to them? That’s when it gets tough.