The fact that this study was even conducted should bring a smile to your face. Here goes: cat ladies are not crazy.

That’s the consensus of a team of UCLA researchers that published their findings in the journal Royal Society Open Science on August 21. Comparing two groups of pet owners — 264 young adults with cats and/or dogs, 297 sad humans without either — they discovered that owning a pet doesn’t make one crazy.

As the researchers put it,

“We found no evidence to support the ‘cat lady’ stereotype: cat-owners did not differ from others on self-reported symptoms of depression, anxiety or their experiences in close relationships. Our findings, therefore, do not fit with the notion of cat-owners as more depressed, anxious or alone.”

That’s good news, considering that 57 percent of American residences house at least one pet. Of that number, 38 percent report having dogs, with a quarter being owned by a cat—obviously, the house changes ownership once a feline crosses the front door.

While many wonderful factoids are littered throughout the study, the team went so far as breaking down cat and dog owners by political affiliation, to which the only viable response is: come on. With 1.5 million dogs and cats euthanized in shelters each year, this should be the least partisan issue ever.

As for the history of this longstanding (and misguided) notion of mental instability in cat ownership, the researchers point to an 1872 NY Times editorial that posits cat lovers as being more infatuated (and less emotionally stable) than the “more rationally behaved dog lover.” The stereotype persists even as people push overbred dogs around in baby carriages. Just saying.

Do You Understand Your Cat’s Behavior?

Do You Understand Your Cat’s Behavior?

On a somewhat serious note — this is admittedly anecdotal, having lived with cats for 26 years (and being a dog lover) — a major reason for this misperception is that most non-cat owners think that cats are like dogs. Or should be. They’re not.

Their social behaviors are wildly different, as are their relationships with humans. Most dog owners (or non-pet owners) I’ve met expect cats to mimic dogs and become frustrated when they don’t. That’s your fault — not the cat’s.

The biggest issue often involves loyalty. Non-pet owners believe cats to be aloof and dismissive of their humans. They might be dismissive of your directives, but that’s because cats do not understand punishment. They respond to reward, which is why clicker training is the only way you can teach an old cat new tricks.

If you yell at them, even while they’re in the act of doing whatever it is that you don’t want them to do, they’ll treat you like an aggressive ape (as my wife taught me when I first starting living with her formerly feral Maine Coon). They certainly won’t learn any silly “lesson” you were trying to teach.

If you want to be in the good grace of cats, you can’t let them free feed. Too many cat owners put out a bowl of dry food and call it a day. Not only is this terrible nutrition, you’ll never teach them anything when they have 24/7 access to kibble. You have to control their food supply. That way they’ll engage in clicker training. If the food bowl is always an option, they’ll take it. 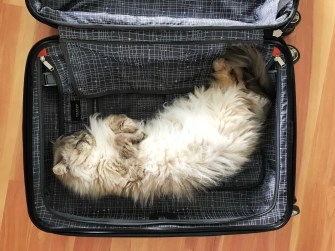 Our Dollface Persian, Baltasar. Six weeks after rescuing him, we discovered he has congestive heart disease—a powerful reminder to love those around you daily.

Cats are intimately tied to place. By contrast, dogs are bonded to their caretaker. That’s why most dogs will happily join you wherever you want to go. Cats are territorial. They need to know the scent of their surroundings. If you start taking kittens outside, though, they’ll adapt. That is much harder when they’ve matured.

This is why my wife and I never check our three cats into a shelter when we travel. We either have a friend apartment sit or we pay someone to visit twice a day to distribute medicine, clean litter, and feed them. (We do leave out dry food while traveling, as their usual 4x a day feeding schedule is disrupted. If that sounds like a lot of food, it’s not: cat digestive systems do better with four smaller meals than two larger ones.)

Finally, you can’t pet a cat like a dog. Most (though certainly not all) dogs are ready to have your hands all over their body. Again, scent: cats don’t want to be covered in some foreign smell spread by strange fingers. You need to first crouch down and meet them eye to eye, then offer a “magic finger” to sniff. They’ll let you know if you can proceed to scratch their necks or top of their heads. Attempt to touch them anywhere else, especially if they don’t know you, and the claws come out.

As the study points out, both cat and dog owners were more acutely aware of animal vocalization distress signals than non-pet owners. Yes, cats speak a language; in fact, they rarely vocalize to other cats, unless hissing and preparing to fight. Cat vocalizations are an evolutionary adaptation to appeal to human sensibilities — if they do it right, our guilt and gullibility.

Crazy? Not at all. But if you want to take in any animal, you need to understand that species on their own terms, not on your hopes, which is why New York becoming the first state to criminalize declawing is so important. All states should follow suit. If you don’t want your couches scratched, don’t bring a cat into your home.

Cat people aren’t crazy. We just love them for who they are — not what we wish they’d be.

Can We Test Gravitational Waves For Wave-Particle Duality?

If quantum gravity is right, these gravitational ripples must be more than waves; they must be particles, too.Back in February of 2016, LIGO made an announcement that changed our picture […]