Polls are not the best indicator of reality, as was shown in the 2016 presidential race. There are many reasons. People might not want to admit the truth. They might purposefully fib in order to skew data. They simply lie. Everybody lies, as data scientist and economist Seth Stephens-Davidowitz claims in his 2017 book.

Of course, such large data sets come with their own problems. A big one, which Viktor Mayer-Schonberger and Kenneth Cukier address in their 2013 book, Big Data, is that we have to leave behind our fascination with causation—a biologically hard-wired feature—and settle for correlation.

“In a big-data world…we won’t have to be fixated on causality; instead we can discover patterns and correlations in the data that offer us novel and invaluable insights.”

Everybody lies; Google searches are the truth. In the comfort of our own home angels and demons appear, naked and honest. Search giants anonymize the data, yet these sets pull back the curtain enough to allow us to reckon with the animals that we truly are. As Stephens-Davidowitz puts it,

“Sometimes we need internet data to correct our instinct to pat ourselves on the back.”

You have doppelgängers. They’re quietly influencing your life. | Seth Stephens-Davidowitz

While he reports frightening data on white nationalism and racism—”n word” queries and Trump voters match up nearly perfectly across the nation—it is our—yes, male and female, though mostly male—fascination with pornography that offers clues to the nature of human sexuality.

Before continuing, let me state that I take no issue with people’s sexual preferences. The point isn’t shame; it’s curiosity regarding the distance between what we present ourselves to be and who we really are. That said, the increasing numbers of child pornography available online—over 45 million reported cases last year alone—is a serious issue that involves every one of us. Living in a world where this flourishes does not bode well for the future of sexuality and, therefore, the entire race.

The other reason this is important is to further the cultivation of honesty in relationships. Too many people cheat and lie to their partners; others cannot properly express their desires and therefore feel intimately and sexually unfulfilled, a topic beautifully explored in Daniel Bergner’s book, The Other Side of Desire. Opening up about desires can be therapeutic and should not be condemned, but condoned. Ambitious, certainly, though possible.

Old school ideology from Alfred Kinsey states that 10 percent of American men are gay. Surveys believe the number is between 2-3 percent. Using a wealth of Facebook data, including location information spread across more tolerant and less tolerant states, Stephens-Davidowitz states that the number is closer to 5 percent, not including closeted homosexuals. 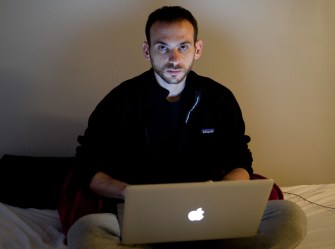 Seth Stephens-Davidowitz pauses to have his portrait taken while he works on his elections predictions at his apartment.

Photo by Kayana Szymczak for The Boston Globe via Getty Images

Men Google about penis size more than all other body parts combined. Women rarely look it up. In fact, for every one woman that searches, 170 men enter it into the search field. Even then, 40 percent of women complain that it’s too big. Yet only 1 percent of men seek information on how to make it smaller.

Men disproportionally ask how to make sex longer. Women search for making their partner climax quicker as much as they want to stretch out the experience.

For women, breast size is a much more common search: seven million breast implant queries a year. When it comes to their behind, until 2014 the searches always dealt with making it smaller. In 2014, that switched: in every state, women searched for a bigger behind more often.

The number one search for women and men when dealing with female genitalia concerns smell.

Finally, what turned out to be one of Stephen-Davidowitz’s favorite pieces of data, and one that does not fly in the face of convention but rather confirms it:

“Men make as many searches looking for ways to perform oral sex on themselves as they do how to give a woman an orgasm.”

Tags
communicationpsychologyrelationshipsSexsexual violencesociety
In this article
communicationpsychologyrelationshipsSexsexual violencesociety
Related
Neuropsych
We all can reach a “flow state.” Here’s how.
Perform at your mental peak.
The Present
Is geo-tracking your child the new “helicopter parenting”?
“My dad asked me if I had been to tutoring and I lied… Then he showed me the tablet.”
High Culture
Could letting social media users rank accuracy help stop misinformation?
People naturally judge fact from fiction in offline social settings, so why is it so hard online?
Sponsored
How to spot an investment bubble before it’s too late
Between the instability of the real estate market and cryptocurrency fluctuations, everyone has been talking about bubbles. But what are they, really?
The Learning Curve
3 rules to express your thoughts so that everyone will understand you
Actor and science communicator Alan Alda shares his three rules of three for effective and empathic communication.
Up Next
The Present
Andrew Yang: Our data should be a property right, new proposal says
“At this point our data is more valuable than oil,” Yang said. “If anyone benefits from our data it should be us.”