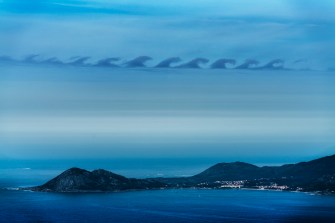 Oh, the places the mind goes when its cartesian other half is stuck between four walls. From the Dunning-Kruger effect, much in evidence these days, it hopscotches to the curious phenomenon of double-barreleld scientific theories. Here are ten of those. Don’t worry, there’s a map or two at the end.

If you’re afraid to ask what it is, it probably doesn’t apply to you. The Dunning-Kruger effect is a cognitive bias whereby low ability specifically leads subjects to overestimate their ability. Popularly: the tendency of stupid people to assume they’re clever. Named after two social psychologists, the Americans David Dunning (°1950) and Justin Kruger.

A psychiatric syndrome in which two persons share the symptoms of a delusional belief. Also known as folie à deux. Ironically, it took two scientists to describe it: Charles Lasègue (1816-1883) and Jean-Pierre Falret (1794-1870), both French psychiatrists.

The feeling of getting worse before you get better, sometimes called a ‘healing crisis’, as experienced by sufferers of syphilis, Lyme’s disease or relapsing fever. Also known as a ‘herx’. Named after Adolf Jarisch (1850-1902) and Karl Herxheimer (1861-1944), two dermatologists, from Austria and Germany respectively.

A model describing the dynamics of biological systems in which two species, one predator and one prey, interact. Named after the US mathematician and chemist Alfred J. Lotka (1880-1949) and Vito Volterra (1860-1940), an Italian mathematician and physicist.

States that the fundamental limit to quantum computation is 6×1,033 operations per second per joule of energy, thereby providing the theoretical horizon for Moore’s Law. Named after Norman Margolus (°1955), a Canadian-American physicist and computer scientist, and Lev B. Levitin (°1935), a Russian-American mathematician and engineer.

Describes the rapid climate fluctuations that occurred 25 times during the last glacial period. Temperatures went up by around 8°C over 40 years. Named after Danish paleoclimatologist Willi Dansgaard (1922-2011) and Swiss geophysicist Hans Oeschger (1927-1998).

Occurs when there is velocity shear in a single continuous fluid, or where there is a velocity difference across the interface of two fluids. Manifests itself as waves on a water surface, or wave clouds in the sky, for example. Named after the British engineer and physicist William Thompson, a.k.a. Lord Kelvin (1824-1907) and Hermann von Helmholtz (1821-1894), a German physician and physicist.

Predicts that genetic variation within a population, in the absence of other evolutionary influences, will not change over time. Named after the English mathematician G.H. Hardy (1877-1947) and the German obstetrician Wilhelm Weinberg (1862-1937).

An attempt to detect the existence of luminiferous aether, which was thought to permeate space and carry light waves. The attempt failed, because aether doesn’t exist. Named after the American scientists Albert A. Michelson (1852-1931) and Edward W. Morley (1838-1923).

Uses continental drift to explain why similar dinosaur fossils can be found at different places on distant continents. The map takes double-barrelledness to a new level, combining the name of the German scientist Alfred L. Wegener (1990-1930) with that of the French geographer Antonio Snider-Pellegrini (1802-1885), whose two surnames sound like a scientific theory all of their own. 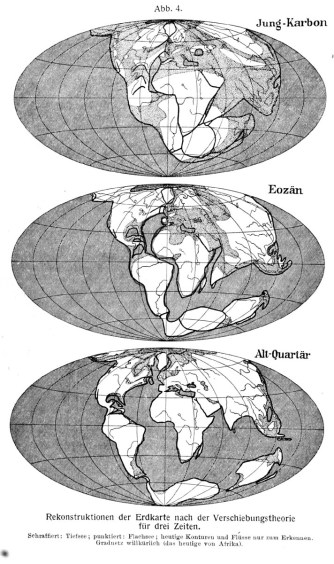 Wegener’s idea of how the continents had drifted apart – he was the first to call the ‘supercontinent’ Pangaea.

The man who coined Pangaea

Wegener is remembered as the first scientist who proposed the theory of continental drift (a single compound word in the original German: Kontinentalverschiebungstheorie), and the first one to propose Pangaea as the name of a supposed earlier supercontinent. He based his idea, published in 1912, on geologic and fossil similarities on opposite sides of the Atlantic Ocean – between the Appalachian Mountains and the Scottish Highlands, for example, or between areas in South Africa and Brazil.

Wegener’s evidence was too anecdotal to find favor with the scientific community at the time. Most geologists thought his theory far-fetched, if not physically impossible. The similarities in the fossil record were explained away by the proposed existence of giant land bridges, now submerged. However, as the decades wore on, the supporting evidence for Wegener’s hypothesis mounted. By the 1950s, it had found widespread acceptance.

But Wegener was not the first one to suggest that continents moved about. The 16th-century mapmaker Abraham Ortelius had had a similar idea. 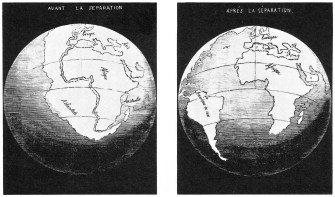 First known illustration of the opening of the Atlantic Ocean.

First opening of the Atlantic

More recently, the 19th-century French geographer Antonio Snider-Pellegrini gave his version of the theory. In his 1858 book La Création et ses mystères dévoilés (‘Creation and its mysteries unveiled’), he too proposed that all continents had at some period in the distant past formed one single land mass. Snider-Pellegrini too based his theory on matching fossils found on various continents.

Operative word in the title: ‘Creation’. For the Frenchman grounded his theory on the Bible. More specifically on two verses in Genesis that suggested that God had designed a single supercontinent in the beginning: “And God said, Let the waters under the heaven be gathered together unto one place, and let the dry land appear: and it was so. And God called the dry land Earth; and the gathering together of the waters called he Seas: and God saw that it was good.” (Gen. 1:9-10).

Perhaps that’s why’s Snider-Pellegrini’s hunch was ignored even more completely than Wegener’s similar suggestion half a century later. Be that as it may, his book contains the first known illustration of the opening of the Atlantic Ocean – about a century before it was validated by the extensive mapping of the Mid-Atlantic Ridge. 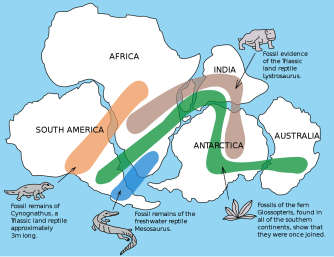 Welcome to Snider-Pellegrini Wegener world, where paleontology and geology meet.

The names of both scientists have been attached to this map – a triple-barrelled illustration of the evidence that gave both the right idea (if not the right theory to prove it): the occurrence of the same types of fossils on different continents.

The map explains why

Even though they are exhibit A for continental drift, these dead dinos weren’t enough to convince mainstream science of the theory’s soundness. That only happened decades later, with the discovery of exhibit B – tectonic activity along that ridge right down the middle of the Atlantic.
Strange Maps #1020

Yet another ocean monster has been discovered.
Hard Science

Explaining a billion-year gap in the fossil record

A puzzling — and huge — break in the geological record finally might be explained.
Up Next
Starts With A Bang

Starts With A Bang #55 — The Cataclysmic Deaths Of Stars

All stars will eventually die. But we’ve never seen ones die like this before.When you look up at the sky, most of the points of light we see appear to be […]