You never forget a gun being pointed at your head. In 1999, Dax-Devlon Ross and I were heading from Washington Heights to the Upper West Side for dinner. We stopped behind a van at a red light on 140th and Broadway. The back door suddenly sprung open. The gun was a foot from my forehead before those policemen even reached us. Another half-dozen cops appeared from a jump out van behind us. We were surrounded.

“Where’s your bag?” one screams as I step out of the backseat of the car—Dax’s girlfriend was in the passenger seat. I tell him it’s uptown; I’m crashing there for the night. The fact they know about my bag means they’ve been tailing us for at least an hour. A young white guy just doesn’t travel through that neighborhood with a black couple for any other reason than buying drugs. The police mindset, not ours.

After nearly strip-searching me in front of a gathering crowd on Broadway, they let us go to a round of thunderous applause. Not one cop offers an apology.

In St Thomas, a cop threatens to put a hole in Dax’s head because, again, a white guy and black guy do not roll together. Then there’s Hackensack circa 2000. Dax often picked me up to hike in Ramapo or Ridgeweood. We’re pulled over twice within a few miles of each other on Route 17. Both times in upper class white suburbs; both times for no other reason than a Vanillaroma air freshener dangling from his rearview mirror.

Well, one other reason.

I’ve had many white friends push back against my assertion that implicit bias is real. Maybe I’d push back had I not lived through these experiences with one of my closest friends. You believe the victim when you see racism up close. These incidents are isolated for me; for Dax, it’s been a lifetime indictment. Only now have we reached a tipping point that has forced the general public to recognize what’s been happening for 400 years.

Dax has long worked in social justice and civil rights. In fact, we were both columnists for The Daily Targum at Rutgers in the nineties; he’s been covering this beat his entire life. His investigative reporting has been featured in the NY Times, Washington Post, Huffington Post, and The Guardian. Recently he published an important article that perfectly captures this moment in American history: “A Letter to My White Male Friends of a Certain Age.”

On my podcast this week I asked Dax for three actionable responses white people should consider right now. Below are his responses.

EarthRise Podcast 89: An Honest Conversation About Race (with Dax-Devlon Ross)www.youtube.com

Do you know your local sheriff? We focus on big-ticket races. Down-ballot candidates are often skipped; otherwise, people choose an incumbent without further investigation. Ross believes it’s essential to know who’s running your neighborhood. Do they have a history of abuse? (This resource could help you find out.) Researching candidates for sheriff, judges, and other regional offices is important for changing the narrative.

We must also hold regional leaders accountable. For example, Los Angeles mayor Eric Garcetti has taken a lot of heat this week. When he was voted into that office in 2017, only 20 percent of the eligible population even bothered to cast a ballot. Today Garcetti announced that up to $250 million will be diverted from the police budget to address health care and education issues in the black community. That’s a good sign, but we have to remain vigilant during its implementation, especially when considering the ongoing failure of the $1.2 billion homeless initiative passed in 2016. The effects of this week’s protests need to be continually fought for until they’re realized.

On his Netflix show, “Trigger Warning with Killer Mike,” the rapper tries to support only black-owned businesses for a day. It’s not as easy as it sounds. Ross found the humor in the episode, but ultimately, “it was also tragic.”

Earlier this week, the LA Times published this list of 85 black-owned food services and restaurants. Ross takes it a step further: Who’s your financial advisor? Your banker? Lawyer? If you own a business, how does staff diversity look?

“Maybe add some folks of color to that list of people you want to talk to. Sometimes white people implicitly assume ‘white is right.’ And a lot times white people are right. I’m just asking them to break it up a little bit, and think, ‘How can I support businesses that are POC-owned and -led?'”

Considering how disproportionally blacks are being harmed during this pandemic—skyrocketing unemployment rate; higher death rates in the health care sector and general population—economic support is more important than ever. We Buy Black is a great resource. 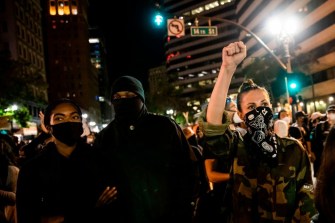 Demonstrators attend a “Sit Out the Curfew” protest against the death of George Floyd who died on May 25 in Minneapolis whilst in police custody, along a street in Oakland, California on June 3, 2020.Photo by Philip Pacheco / AFP

Do the inner work

“What’s coming up for you?” Ross requests that you investigate previous relationships, incidents, and mindsets around black people. Has one bad interaction colored your thinking on the race? If you’ve used isolated experiences to dictate beliefs, you need to rethink your biases.

Education is paramount. Ross mentions a white friend who recently learned about Black Wall Street while watching an episode of “Watchmen.” At first, his friend thought it was fake. After researching the incident after he was furious over his ignorance. A century later, Human Rights Watch found police abuse centralized in the exact same region of Tulsa. You can’t change what you refuse to investigate. Change begins when you explore your implicit bias.

If this week has taught us anything, it’s that we desperately need to change. And then keep going, and going, because America’s horrific record—our tragic present—is on full display. Turning away any longer would be criminal. The can has been kicked far too long.

Two ICU physicians offer a new approach to stopping it.
Up Next
Hard Science

A ‘Strawberry moon’ eclipse is happening on Friday. Here’s how to watch it from home

On Friday, the moon will pass through the Earth’s outer shadow, known as the penumbra.