In a much-anticipated announcement on Tuesday, Facebook introduced the world to its new cryptocurrency Libra which is slated for launch in 2020 and will allow the popular social media giant’s 2.4 billion members (and anyone with a smartphone) to quickly and inexpensively send money to each other and transact with businesses that have a presence on the Libra blockchain.

Facebook’s goal for the new stablecoin—which will be pegged to a basket of fiat currencies like the US Dollar and Euro—is to provide an accessible financial system to the world’s 1.7 billion unbanked inhabitants. As both a “cryptocurrency and a global financial infrastructure,” Facebook was careful to say that Libra is not maintained internally and is instead serviced by a non-profit collective of companies participating in the ecosystem. 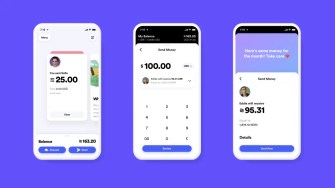 The UI of the Calibra Wallet.

Members of this collective, based in Switzerland and known as the Libra Association, must pay at least $10 million to join. They will then be responsible for validating Libra transactions, administering the fund which backs its value, and voting on how to allocate the association’s capital towards socially conscious initiatives. Founding members so far include ride-sharing companies Uber and Lyft, as well as eBay, Spotify, PayPal, Visa, and Mastercard.

Their early investment implies that these businesses will accept Libra as payment once the cryptocurrency launches alongside its Calibra wallet, which was also part of Facebook’s announcement. Participation by these companies suggests how users might obtain and eventually use Libra. While Facebook is capable of hosting air drops to spread the word and vision, Visa and Mastercard’s collaboration with Libra indicates that the stable coin may be directly purchasable via credit card.

Will Libra be welcomed by the crypto community?

Facebook’s announcement has already whipped up a storm in the space with many leaders in the crypto community voicing their opinions.

Justin Sun, the founder of Tron who recently paid $4.75 million to have lunch with Warren Buffet, thinks this will be a great thing for the space saying, “Facebook and Libra. I feel a huge FOMO and bull run for crypto is on its way.”

However Jeremy Dahan, CEO of diamDEXX, a stablecoin backed by diamonds, is giving a more balanced view, stating:

“We’re still waiting for more information, but this roll out will be met with mixed feelings from the crypto community at large. On the one hand, Facebook has billions of users who can, in a single day trigger a wider acceptance of cryptocurrencies. On the other, a project such as this by such a massive, centralized company is a far cry from the ideals upon which the crypto community is based. Privacy concerns come to the forefront for a stablecoin being offered by a company such as Facebook, who have had many issues in this area in the past.”

Using Libra for payments will be easy, as it will be integrated directly with the Facebook Messenger application as well as WhatsApp, and probably with other Facebook properties as well (such as Instagram). However, it’s not yet clear which countries will gain access to Libra first, especially with a regulatory backdrop for cryptocurrency that varies drastically between sovereign borders. Just hours after its announcement, US lawmakers were already asking Facebook to halt the rollout of Libra until they could hold hearings on the subject.

It’s yet unclear whether Facebook will have the lobbying power to launch Libra according to its optimistic timeline, especially when many lawmakers are already seeking to limit the social media leader’s reach. What is clear, however, is that Facebook is waving the checkered flag for blockchain and cryptocurrency’s race to the mainstream consciousness.

People naturally judge fact from fiction in offline social settings, so why is it so hard online?
The Future

Bend it. Stretch it. Use it to conduct electricity.
The Present

In the future, driving an app across a bridge could let engineers know how safe it is.
Health

Brown noise, the better-known white noise, and even pink noise are all sonic hues.
Up Next
Health

The study highlights the incredible neuroplasticity of the brain.