In 1979, the Chinese government decided to implement its infamous one-child policy, which was actually a revision of the nation’s two-child policy. Beginning in the ’50s, China installed safeguards to protect against an unsustainable and booming population. Most Americans — especially those who believe bearing children is a duty mandated by God — frowned upon any state that would negatively impact fertility rates; their agenda is to legislate in the opposite direction. The Chinese government, however, believed it to be an economic imperative.

Today, the population of China is approaching 1.4 billion. While some scholars believe the country’s one-child policy resulted in 400 million fewer births, others claim that it was useless. Regardless, in 2013 officials noticed a worrying trend: the increasing aging populace was not being replaced fast enough. In 2018, they relaxed the policy. Ironically, China recorded 15.2 million births that year, the lowest level in over 60 years.

China isn’t the only nation experiencing a replacement problem. According to the United Nations, as of late 2018 there are, for the first time in recorded history, more over-65s on the planet that under-5s — 705 million seniors to 680 million infants. 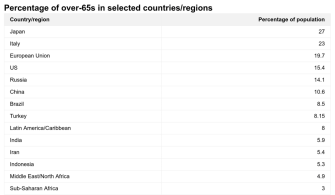 As the chart above details, all nations are not experiencing declines at the same rate. For global population rates to sustain and grow, each woman needs to produce 2.1 children over the course of her lifetime. In 1960, women worldwide averaged 5 births; 50 years later that number dropped to 2.4.

The country with the highest fertility rate: Niger, with 7.2 births per woman. At the other extreme sits Japan. With an average life expectancy rate of 84 years and boasting 27 percent of the population over 65, the country leads the world in both measures. To combat the upcoming economic stress, the Japanese government recently announced a five-year increase to the retirement age, which is now 70 (also the highest in the world).

The reasons for this decline in birth rates — and the Japanese are not alone in this — often point to millennial dissatisfaction with sex and smartphone addiction, which are both factors. Yet they’re not the only ones. Widespread availability of pornography has been cited for helping move social skills from public spaces to virtual and augmented realities; hook-up culture fostered by dating apps; and more women in the workforce are all important factors.

Economic insecurity also plays a major role. There is no shortage of CEOs willing to exploit this fact. The Japanese have a word for it — karoshi — which means “death by overwork.” Employers manipulate their workforce by offering fewer benefits and no overtime, ensuring the fear of losing their job always lurks. In China, Jack Ma, co-founder and executive chairman of the Alibaba Group, recently endorsed a 12 hours a day, six days a week schedule. He thinks his countrymen should take pride in their overworked and undersexed positions. Ma’s net worth is $39.9 billion.

Most humans will never have such financial luxury. A billionaire “paying tribute” to a 72-hour work week shouldn’t surprise us — it’s the ultimate dangling carrot and part of the reason one acquires such wealth in the first place. Yet such a mentality does not bode well if you’re rooting for population increase. It’s hard to imagine raising a family when you have the stress of potential unemployment hanging over you every day. 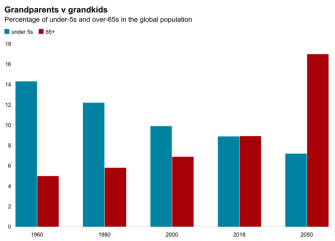 While the economic perils of an aging population are often discussed when reading over such data, less questioned is a parallel issue: How do we deal with a world with too many humans?

We’ve been evolving for millions of years. As a convenient starting point, in year 1 of the common era there were 200 million humans on the planet. It took an entire millennia to add 75 million more. We don’t actually achieve 1 billion until 1804; a century later, 1.6 billion. This was in important century, with the first medically implemented use of vaccines and the introduction of germ theory into hospitals changing our understanding of medicine. Something was shifting.

In 1950, we’re at 2.8 billion. By now, the Industrial Revolution is turning into the Technological Revolution. Medicine, though not without its problems, has vastly improved. Let’s jump ahead to Prince’s year, 1999, as we’ve doubled the human population over the last half-century, to 6 billion. Within a quarter century more we’ll hit eight billion.

This hockey stick graph of population increase has a correlate in medicine: cancer. What we treat as the biological victory of the species is the leading factor in our unraveling. Nobody likes to treat humans as data points on distribution graphs, but that does not change the fact that we’re overtaxing the planet’s resources at unsustainable rates. The economic consequences of an aging planet pale in comparison to a planet that cannot provide for our voracious appetites.

This doesn’t have to be a doomsday story, though if we continue to exploit finite resources in the current manner, there’s no other choice. Humans are terribly reactive and never quite proactive enough; a serious population decline might be required for course correction.

Unfortunately for the under-5s, they’re going to have to brunt this fallout, a reality that has led some to speculate on whether having children in an era of climate crisis is even worthwhile. The gut reaction is “yes,” but sadly emotions are in part what got us here to begin with: we simply feel we’re above it all. In the future, stronger minds must prevail.

U.S. states vary radically in terms of electricity generation. Vermont is the cleanest, while Delaware is the dirtiest.
Videos

To preserve biodiversity and ecosystems, protected areas should be connected into a gigantic World Park.
Up Next
Starts With A Bang

Now that we’ve seen our first one, we want more, and we want them better. Here’s how to get there.To resolve any astronomical object, you must achieve resolutions superior to the […]