Virgin Galactic made the hearts of all speed enthusiasts beat faster by announcing a new agreement with Rolls-Royce to create a supersonic passenger jet.

The space tourism company founded by billionaire Richard Branson revealed an enticing look at the aircraft’s design, which would not be taking people to the edge of space but between points on Earth. The move allows the company to leverage its space technology for super-fast travel across the planet. Crucially, the craft would utilize sustainable, next-generation fuel.

The concept for the supersonic jet, which can potentially disrupt commercial airline travel, has undergone a NASA review. Next, the company is planning to work with the FAA to create a framework for certifying the new aircraft for flight.

Virgin’s Galactic’s partner in this venture, the British company Rolls-Royce, is, of course, no stranger to supersonic aircraft-making, having built engines for the famous Concordes.

The first aircraft built will be targeted the speed of Mach 3, which is three times the speed of sound. In other words – a blazing 2300 mph. The plane will be able to carry from 9 to 19 people, cruising at an altitude of over 60,000 feet.

“We have made great progress so far, and we look forward to opening up a new frontier in high speed travel,” he said in a statement. 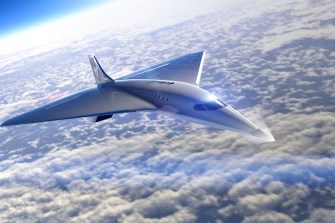 The company has also made great strides in the development of its spacecraft. Check out the recently-released interior of its SpaceShipTwo Unity cabin:

Break into London Zoo? Illegal, but it would improve the London Circle Walk
Videos

Do aliens dream about meeting us, too?
▸
with
Jill Tarter
Strange Maps

EV charging stations are the most widespread alternative to gas and diesel pumps. Each alternative has its own hotspots and “deserts.”
Up Next
High Culture

Andy Samberg and Cristin Milioti get stuck in an infinite wedding time loop.