Today is the first day of fully legal recreational cannabis in Canada. It has been illegal there since 1923, but medical cannabis was approved nation-wide in 2001.

The Cannabis Act allows people aged 18 and oder to possess up to 30 grams (just over 1 ounce) of legal cannabis in its dried or “equivalent dried form” in public. 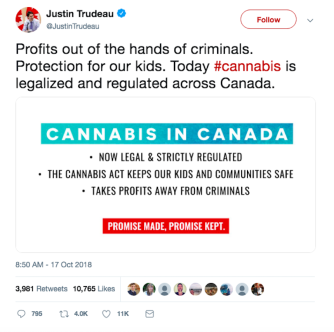 Profits out of the hands of criminals. Protection for our kids. Today #cannabis is legalized and regulated across Canada. pic.twitter.com/0ZxtohOHG0

In yet another reminder that elections matter, current Prime Minister Justin Trudeau campaigned in 2015 on — among other things — legalizing cannabis; his party won a majority that election year. In the Spring of 2018, that party approved full recreational cannabis legalization.

It’s only the second country in the world to do so, after Uruguay, and the first G-7 country. 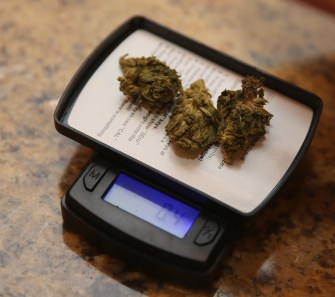 A closeup view of marijuana on a scale as photographed on August 30, 2014 in Bethpage, New York.

In addition, citizens may cultivate up to four plants in their households. In prime conditions with maximum light and assuming no problems during the growing process, that can be up to 150 grams per plant — 5 ounces. They can use said plants to create their own edibles, as well, but importantly, citizens cannot yet purchase food-based cannabis products — edibles — until the government policymakers have studied the effects and complexities of such products, but it looks like it won’t be long.

While there are critics that suggest the move will create more laws because the industry will be heavily regulated, it definitely moves the industry out of the shadows and into the commercial spotlight, for what that is worth.

Here’s the first legal recreational cannabis sale in the country. The transaction was performed at just after midnight, in St. John’s, Newfoundland, at a retailer named Tweeds.

But be careful if you’re planning to visit Canada to sample some of its new legal marijuana. The Washington Examiner reports that telling border patrol agents that you smoke pot in Canada can result in a refusal to re-enter the US.

To reap the benefits of digital technologies, we must contend with their addictive designs.
The Past

Soviet researchers studied crime through a Marxist-Leninist lens. Under Lenin, a humanitarian approach to criminality briefly emerged, but dissipated when Stalin rose to power.
Up Next
Neuropsych

Think you’re bad at math? There’s a reason for that.

People often say, “I’m just not a math person,” but the truth is that no one’s brain is hardwired for math.