Health care spending in the United States reached $3.5 trillion in 2017, roughly 18 percent of the nation’s GDP. With so much to gain, big tech companies like Apple, Amazon, and Uber are making incipient moves into the space. Such moves from large economic players will alter traditional models of health care, no doubt in ways we can’t fully envision.

But will it help? Potentially. In recent years, big tech has gathered the resources and creative minds to change the way we approach many aspects of our lives, even in conservative fields like health care. But to create lasting change, big tech will need to collaborate with traditional health care players to ensure all patients, not just the tech savvy, benefit.

Last year, Amazon purchased online pharmacy service PillPack for a cool $800 million. This has Angela Chen at The Verge wondering if we’ll see PillPack integrated into Amazon’s other services, allowing Prime members to order medication through the company’s website. Such a prediction makes sense, but it’s some ways off. Amazon just recently announced that Nader Kabbani, an Amazon veteran, would lead the pharmacy initiative.

Other tech giants have been making their opening moves, too.

Alphabet, Google’s parent company, has made several health-centric efforts. These include investing in companies like 23andMe and Oscar health, collaborating with Fitbit to create patient-generated electronic health records, and experimenting with its AI platform Deepmind to improve health services and records. 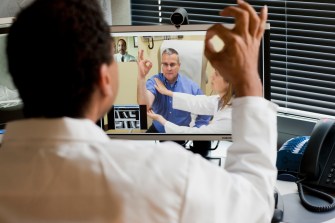 What does telemedicine look like? Dr. Maurice Cates, Orthopedic Surgeon, conducts a live Orthopedic consultation remotely by video with a patient.(Photo by Brooks Kraft LLC/Corbis via Getty Images)

As is evident, big tech’s opening moves are less about disruption and more about positioning. Although we aren’t seeing grand overhauls yet, we can predict where these companies plan to make their entry point. And the focus appears to be on their traditional base: tech-savvy, middle-class millennials.

But the bulk of health care expenditures, Dowling notes, go to the elderly, specifically people in the last year to year-and-a-half of their lives. And because people are living longer, into their 80s and 90s, they’ll spend more years drawing upon health care.

Devising apps for digital watches that generate electronic health records is amazing. But how many people do you know own a Fitbit or Apple Watch? How many elderly people take an Uber to the hospital, and how many Ubers are wheelchair accessible? The market for such devices remains niche, if growing, even among millennials.

Another consideration: Would Medicare cover such costs?

Even when tech is designed for the elderly or ill, it rarely considers their needs and partialities. In another Verge article, Chen surveyed the growing category of “aging tech” to discover airbag belts, smart shoes, and smart lamps, all designed to assist in the case of a fall.

As Chen notes: “So many of these devices seem to rely on the ability of caregivers to coerce their elderly relative or patient into using the solution. But if someone doesn’t want to wear your shoe or your belt or your watch, it’s hard to make them.”

Despite these hurdles, big tech can still be a benefactor for health care, and its most serviceable offering is already here. The smartphone.

The result is a health care device that requires little training for any demographic. Americans already use their smartphones for finances, travel, communications, reservations, photography, and a host of other daily activities. Adding health care to the mix would be a small ask, even for the elderly.

In his book Health Care Reboot, Dowling discusses a Northwell initiative that had patients televisit with their nurse through tablets and smartphones. The initiative hoped to better serve patients at home while limiting unnecessary travel and hospital visits. Initially, there was concern that older patients would have trouble adapting, but even patients in their 80s found the connection intuitive and helpful.

“The use of technologies such as smartphones, tablets, and laptops signals the beginnings of the age of the consumer in health care,” writes Dowling. “In a general sense, as patient, a person is subservient to the provider. As consumer, the person is more empowered with greater access to information and an ability to behave as consumers do in other fields.”

Like big tech, health care revolves around data — a patient’s family history, their medical records, their current prescriptions, and the ever-evolving medical literature. The easier and faster it is to collect and coordinate this data between patient and provider, the better health care can become.

Smartphone architecture is already designed to collect and deliver data in a user-friendly manner. By pointing it in the direction of health care, big tech can help expand its definition beyond hospital visits to make the patient an active participant.

Why health care should start long before you reach the hospitalcontent.jwplatform.com

The spray uses snippets of DNA to gum up virus replication.
Up Next
Thinking

Alan Watts: What is the self?

Self defined not as individual ego, but the whole universe.