Ever since 9/11, politicians left and right have been criticized for their inability to call white nationalist criminals “terrorists.” Such a reframing might appear slight, yet the consequences are important. Ultimately, this designation pushes back at the chronic problem of American exceptionalism, the false notion that “natural” (i.e. white) American citizens are somehow above citizens of other nations.

Such a label also denies another related idea, manifest destiny, which, like American exceptionalism, states that America has a mandate to change the world. By calling Americans terrorists, we can identify the actual root of racial and nationalist tension on our soil. The reality is “we” are not different from “them.” While there are certainly qualities of democracy to be celebrated, the shadow side of such a system has become quite dark. As Thomas Hobbes knew, it is quite easy for individuals to revert to our animal nature and provoke a “war of all against all.”

On Saturday, South Bend mayor Pete Buttigieg spoke alongside eighteen other presidential candidate hopefuls in Las Vegas. He refused to mince words during his opening statement. America has a white supremacy problem, and it’s getting worse.

“America is under attack from homegrown white nationalist terrorism. White nationalism is evil. And it is inspiring people to commit murder, and it is being condoned at the highest levels of the American government, and that has to end.”

Though the highest level of government balks at such an explanation, instead trying to pivot to mental illness and video games (while citing the wrong city) as the cause for recent shootings in El Paso and Dayton, the good news (if there can be any in such situations) is that the Texas shooting will be investigated as domestic terrorism. When someone as conservative as David French is calling for war on white-nationalists terrorists, public sentiment has certainly turned.

It might have taken an anti-immigrant manifesto posted on 8chan—a site that’s become so toxic even the founder is calling for its removal—to inspire officials to look at this as a case of domestic terrorism, but any progress on this issue is better than silence.

Over the weekend, the NY Times Editorial Board came out with a scathing indictment of white nationalism, noting that if the shooters over the weekend (or last week at a Garlic Festival shooting in Gilroy, California) were radical Muslims the reaction from the government would have been much different. You would hear no chatter about video games, but rather a call for international mobilization to combat the dangers of Islam.

In fact, the best the president could offer after this weekend’s shootings is some form of background-check legislation tied into immigration reform, as if these were connected issues. The only connection is that immigrants are in need of protection from murderers, not that they’re the actual problem.

As the Times puts it, white supremacists act in the same manner as terrorists around the planet. While it’s not a specifically American disease, it has become particularly prevalent here over the last few years.

“White supremacy … is a violent, interconnected transnational ideology. Its adherents are gathering in anonymous, online forums to spread their ideas, plotting attacks and cheering on acts of terrorism.”

Whether it’s adherence to skin color or a violent book, call terrorists what they are. Cheering on or acting out the killing of others due to ideology is terror, plain and simple, and it’s getting worse—another Gilroy man boasted that 500 people, not three, should be the real goal of a mass shooting. Though divided by outward appearance, the inner rot of these men is the same, regardless of what country they originate. 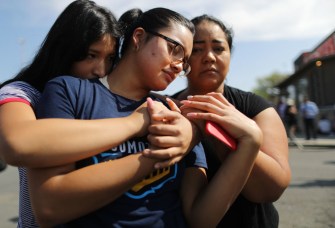 Mother Aidee Gutierrez (R), originally from Mexico, and daughters Marlene Gutierrez and Brissa Martinez embrace at a makeshift memorial outside Walmart, near the scene of a mass shooting which left at least 22 people dead, on August 5, 2019 in El Paso, Texas.

While businesses could fill in the gaps in the government refuses, firearms are moneymakers, meaning this is not a likely path forward. Perhaps Walmart, the site of the El Paso massacre, would consider further gun restrictions in their stores, yet they declined to make such move in the wake of Saturday’s shooting (though, to be fair, they have been somewhat progressive on this issue since 2015).

And so, like Buttigieg (among others at the conference) said, several policy proposals need to be enacted—ideally immediately, though that is unlikely for another (almost) two years (at best). Buttigieg supports universal background checks, banning high capacity magazines, removing at-risk and mentally ill citizens from purchasing firearms, and nonpartisan studies by the CDC on the effects of gun violence.

Common-sense implementations. The problem is that we’re living in an era where sense is uncommon. Thus, we’ve ended up where we are: living in a nation in which the government condones terrorism from the top-down. As usual, the citizens are left paying the price.

U.S. states vary radically in terms of electricity generation. Vermont is the cleanest, while Delaware is the dirtiest.
Up Next
Starts With A Bang

Has LIGO Just Detected The ‘Trifecta’ Signal That All Astronomers Have Been Hoping For?

The dream of multi-messenger astronomy is to seen an event with gravitational waves, neutrinos, and light all together. The newest candidate just might get us there.When it comes to cataclysmic events […]